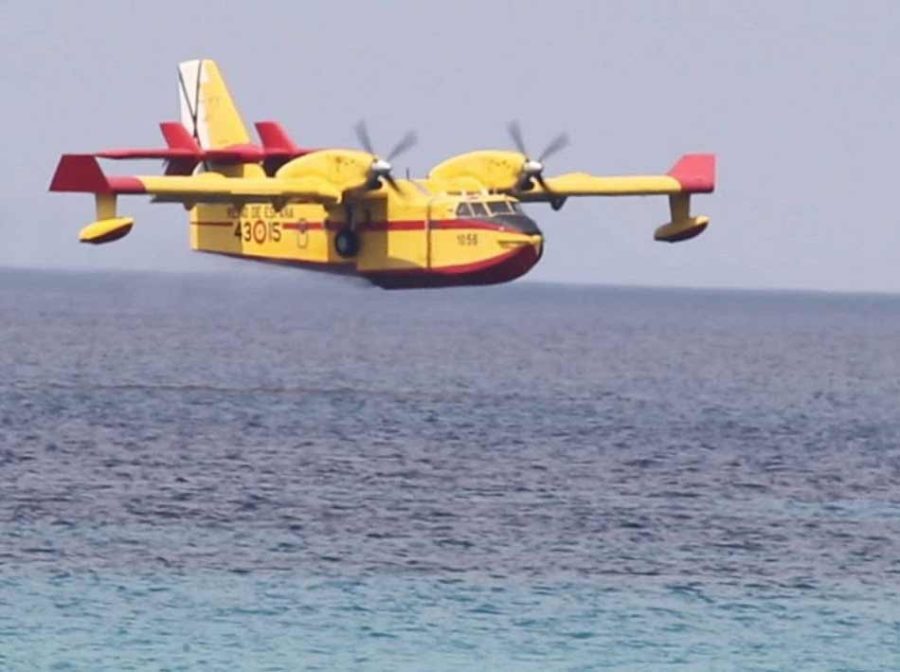 Posted on 3 February, 2022 / by Productes de Mallorca / in anecdotes, History

Humans are restless by nature, which is why we like to move and innovate. Only 150 years ago we moved on foot or on horseback. Since then, we have not stopped making progress: bicycle, car, train, tram, aeroplanes… One of the inventions that had its heyday in the 1930s were seaplanes and although they are still used today, it is for very specific purposes, such as military or fire-fighting. Our island was a very important point for these interesting aircraft, so today we are going to talk about Mallorca and seaplanes.

1920: the first seaplane arrives in Mallorca

It was not the first aeroplane to arrive on the island, but it was the first seaplane. It was the 18th of March 1920 and the Italian pilot Guido Janello took off from Barcelona on his way to Mallorca aboard an Italian seaplane from the Savoia factory.

After about 1 ½ hours of flight, the aircraft splashed down in the bay of Palma, in a festive atmosphere, with great expectation and watched by hundreds of people, both on the docks and on board different boats.

After barely two hours on the island and having been entertained by the local authorities, the crew of the Savoia S-9 took off again and returned to Barcelona. They took with them a large ensaimada, a gift from the newspaper Ultima Hora, for the Catalan journalists.

The business project: an airline between Barcelona and Mallorca

This first flight by Janello, and the following one by Umberto Guarnieri in April 1920, were merely the first tests of what was to be a regular link between Barcelona and Mallorca, which would be covered by seaplanes. The company behind the project was Talleres Hereter, a company that was starting out in the manufacture and sale of aeroplanes.

Due to various circumstances, this initiative did not prosper and Hereter had to close its doors in February 1921, leaving the project parked.

Linking Mallorca with the mainland quickly continued to be an aspiration for the Mallorcans. And with this idea in mind, a group of local entrepreneurs started the “Compañía aero marítima mallorquina” in March 1921, which was to transport passengers, but above all, postal mail. They managed to win an award from Correos y Telégrafos, and to provide the service they incorporated 6 aircraft: 2 Savoia, called “Mallorca” and “Palma” and 3 Macchi, “Menorca”, “Ibiza” and “Barcelona”. The 6th seaplane was to be called “Ramón LLull” and was to be built here in Palma.

The base and hangars were just below the windmills in the Es Jonquet neighbourhood, more or less where the well-known Marítimo bar is located today. The company made many flights with a good service, but some accidents, problems with the administration and disagreements with foreign investors finally led to the suspension of its activities in December 1923.

The seaplane school of Porto-Colom

It seems incredible but yes, one of the first schools in Spain to train seaplane pilots was established in Porto Colom. It was May 1922 when Angel Orté arrived in Mallorca with his own Italian seaplane “Macchi” and with the idea of making tourist flights on the island.

He also offered himself as a pilot to the Aero-Maritima, although finally and with the help of the town council of Felanitx, he managed to open the school, initially enrolling 5 students. After building a wooden hangar, classes began in September 1922 and after the necessary 25 hours of flying, 3 pilots obtained their licence.

The long winter months and bad weather led to a lack of more students, so that after a year, in 1923, the school had to be closed.

In May 1935, LAPE began the Barcelona – Palma route with German Dornier seaplanes. After a couple of months of activity with these aircraft, it was decided to continue the service but with conventional aircraft, flying to Son Bonet or Son San Juan.

Between the 1920s and 1930s, different seaplane flights had used the bay of Pollensa to land. One notable expedition left Italy in 1928 and flew almost 3,000 km across the western Mediterranean, with 61 Savoia-Marchetti seaplanes. Commanded by the Italian general and aviation hero Francesco de Pinedo, it used the magnificent bay of Pollensa in one of its stages.

Years later, in 1934, Commander Franco organised the return flight to Spain with a group of Dornier Wal seaplanes, also landing in the bay of Pollensa.

Once Pollensa’s excellent conditions were proven, in 1935 a first “Military Aviation Detachment” was established in a very basic way. Later, in 1937, in the middle of the civil war, work began on converting the detachment into a real military base, with the construction of a large esplanade, ramps and buildings.

Today, the Pollensa military aerodrome serves as a base for the 43rd Air Force Group, providing fire-fighting and rescue and rescue services with Canadair CL-215 seaplanes.

Seaplanes have a real following, and this is demonstrated by the fact that the AEDH (Asociación Española de Hidroaviación) wants to revive the glorious Schneider Cup, which until 1931 was a very prestigious sporting event. The idea is to hold a new edition in September 2022, using the facilities of the military base in Pollensa.

It seems that seaplanes are making a comeback, and that our island will once again become a strategic point for them. This is demonstrated by the project of the company Isla Air, which wants to link the Balearic Islands and the Iberian Peninsula flying with modern seaplanes. At the moment, the company is awaiting certain administrative procedures, but as soon as it can fly, I’m going to sign up.

Mallorca and seaplanes, an excellent way to travel and experience the islands from the sea and from the sky, are you going to miss it?

If you are interested in knowing more about aviation in Mallorca, visit our previous post about the first flight in Mallorca: