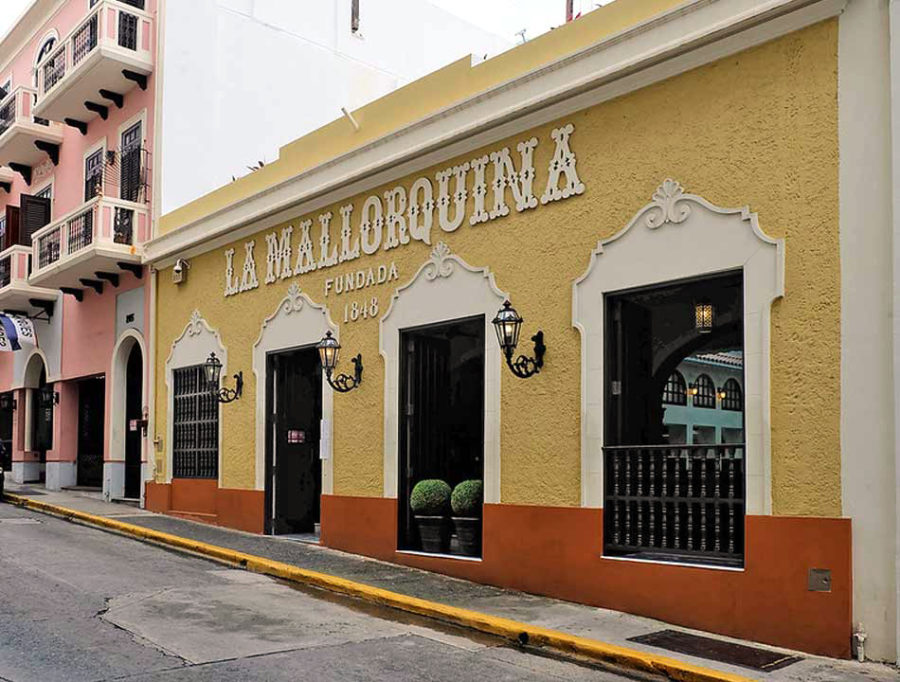 Posted on 28 October, 2021 / by Productes de Mallorca / in anecdotes, History

Nowadays it seems to us that Mallorca is a rich place, and that its inhabitants have a high standard of living. But it was not always like that, and in fact in many periods the island suffered deep crises and many Mallorcans were forced to emigrate. Hence the presence of Mallorcans in Puerto Rico.

The island’s economy in the 19th century was mainly agricultural, although it was not always a very profitable activity. Population increases often led to high unemployment rates, very low agricultural wages and general discontent.

At the end of the 19th century, Mallorca’s countryside suffered a major setback with the phylloxera plague, which destroyed hundreds of hectares of vineyards. The most important industrial sector, footwear, also went into decline, and these two circumstances left many families without work.

Why and where to emigrate to?

The agricultural crisis, the industrial crisis, the lack of opportunities and even avoiding military service. The dream of emigrating and coming back after having made a fortune. And why not …. the desire for adventure. Possibly all these circumstances led thousands of people to seek a better future elsewhere. The favourite destinations of the Mallorcans were France, Algeria and America (Argentina, Uruguay, Cuba and Puerto Rico).

In this post we will focus on Puerto Rico, which welcomed countless Mallorcans as their new homeland.

In 1765, King Charles III began to liberalise the monopoly on trade with America held by Seville and Cadiz. Somewhat later, in 1778, Palma de Mallorca was included as one of the 13 ports authorised for trade with America.

And so the Mallorcans not only had a greater opportunity to send their goods there, but also to get to know those lands.

The first Mallorcans in Puerto Rico

Sóller is nestled in a deep valley and at that time had very poor communications with Palma, which made the mobility of people and trade very difficult. It is not surprising that with the enterprising character of the Sollerics, many decided to pack their bags and emigrate. Various historians consider Juan Marqués i Marqués, from ca’n Alic, to be the first Solleric to emigrate to Puerto Rico in 1837. From then on, many other Mallorcans followed in his footsteps.

Several schooners (the “Palma”, the “Victoria” and the “Anibal”, among others) covered the route between Mallorca and the Antilles. They were large, sailing vessels with a displacement of over 100 tons that carried all kinds of goods, the most common being oil, wine, almonds, capers, liqueurs, soap, esparto grass, fabrics, shirts, hats and footwear, all made on our island, Mallorca.

In addition to these products, there was also room for passengers, emigrants who were looking for a better future in America. The journey was not easy, with many people crammed into a few metres and in very precarious conditions. If the weather was good, the crossing could take 50 days.

Palma, Sóller, Artá, Felanitx, Manacor, Pollensa and Inca were the towns from which most Mallorcans left for Puerto Rico.

It was very common that when one emigrated to a specific destination, it was because a friend or acquaintance from his town had already done so before. For example, in Guayama or Mayagüez, the most common were emigrants from Artá, while in Lares and Adjuntas, the most common were the Sollerics. The Mallorcans already established in Puerto Rico used to take in their fellow countrymen and give them work or help them to find work.

What they did most was trade and agriculture, and what they did best was coffee production, which was of excellent quality in Puerto Rico. They also set up and worked in prosperous rum distilleries such as Ron El Mensajero, Ron Ancla, or Ron Pizá.

Others went on to make a good career in the liberal professions, standing out as doctors or pharmacists, as soldiers or also in important positions in local politics.

One of the best known shops was “Los Muchachos”, a place where many young Mallorcan newcomers had their first job and where they learnt trade and business.

The restaurant “La Mallorquina” was founded in 1848 in old San Juan, as was the café “La Bombonera”, which until recently still sold ensaimadas, known in Puerto Rico as Mallorcas.

Some coffee plantations such as “La Mayol” and “La Balear” or sugar mills such as “La Central Sóller”, owned by the Marqués family, were particularly prosperous and significant in their time.

The return to Mallorca, the “Indianos”

This was the name given to those who had returned from “Las Indias” after having made their fortune. And in a way, showing their success was important. By building an eye-catching mansion, an emblematic building or making important investments.

And this is what some sollerics did on their return from Puerto Rico, who were the driving force behind the Banco de Sóller, the “Tren de Sóller” and other important businesses related to gas and electricity.

What remains today in Puerto Rico

Some towns have a typically Mallorcan name, such as “Palmer”, “Rafael Capó” or “Castañer”. What can we say about so many people with Mallorcan lineages, such as Cañellas, Guasp or Rosselló among many others. In fact, one of the last governors of Puerto Rico (until 2019) was Ricardo Rosselló.

It is possible that, after more than 100 years of being under American influence, many Puerto Ricans are no longer aware of their origins. But what they surely enjoy a lot is eating some good “Mallorcas”, which is the name they give to the ensaimadas they make there.

To find out a little more

Perhaps you have distant relatives in Puerto Rico, or perhaps an ancestor of yours emigrated and returned from there. Or you are simply interested in this kind of life adventure and would like to know a little more about it.

If so, we recommend 2 works:

Short novel: “Un mallorquí a Puerto Rico” The adventure of an indiano, by Carmel Bonnín.