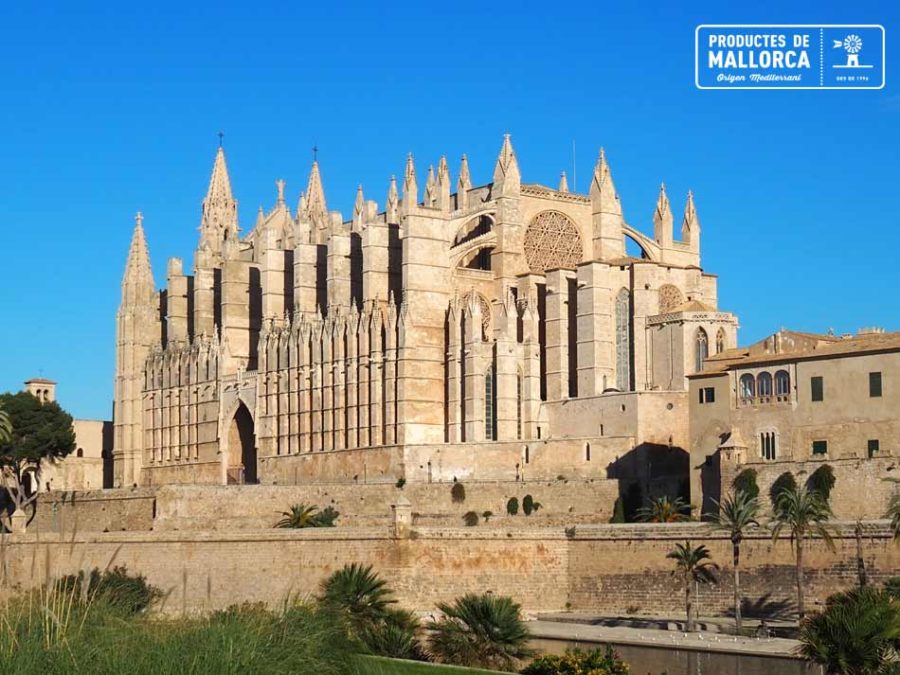 Posted on 12 July, 2020 / by Productes de Mallorca / in Heritage, History, Places of interest

If you arrive in Palma from the airport you will surely be amazed by our fantastic Paseo Marítimo, with its palm trees, its pleasure boats and a magnificent view of the bay. But most impressive of all is the view of the cathedral, especially at night. In this article we will tell you some things about the cathedral of Palma.

The Gothic cathedrals began to rise in the 12th century in France, and the truth is that they were quite a revolution. Until then, Romanesque buildings and churches were very thick-walled, with small windows, and therefore very dark inside. The new construction systems of the Gothic style showed that by making the arches pointed (with a vertex upwards) one could better control the force of gravity, make very high pillars and very thin walls. In this way you could also make large stained glass windows and achieve 3 things: Height, elegance and above all, light, lots of light.

The Gothic style became fashionable and quickly spread throughout Christian Europe. It was a great advance, with 3 main elements with which architecture was revolutionized: a/ The pointed arch b/ The flying buttresses (exterior reinforcements) and c/ The ribbed vault (above, where the pillars cross).

This is how they were built

Those who designed the cathedrals had a very deep knowledge of building with stone and so, fundamentally, they were master stonemasons who learned the techniques of architecture. Everything is based on experience, and on the system of trial and error, because until the 19th century there were no structural mathematical calculations as there are today. Being a stonemason was a highly respected trade and his techniques were well kept secrets in his guild.

Many times the plans were made on large plates of clay, probably because they were easy to mark and correct if interested. The stone used was limestone, not very hard and relatively easy to cut and carve. The stone pieces were made by hand, one by one, and in fact the stonemasons were paid for each piece made, which had to be numbered. All the arches and complicated pieces were made on the basis of wooden templates.

To erect such high buildings, very good foundations had to be dug, with pillars up to 15 metres deep, and huge wooden scaffolding had to be built. In short, a great challenge for the time.

And those heavy pieces, how could they be raised so high?

Well, the secret is in a very ingenious machine, of Roman origin, and built in wood. It’s called the “Wheel Crane” or popularly… Squirrel Wheel, because that’s what it’s about, a kind of giant bass drum similar to those where hamsters are put to run without moving. But in this case those who went inside were 1 or 2 men, and the force generated was used to lift large stones to the top. It is estimated that 2 men could lift weights of up to 6 tons.

The structure and proportions of the cathedrals

If we looked from above, we would see that many Christian temples were made with a plant in the shape of a cross, a symbol of Christianity.

But, in addition to this, some experts say that medieval architects built cathedrals according to very specific proportions, since they were based on measures that were considered “mystical” or divine. In general they were based on temples described in the Bible, such as the temple of King Solomon, or on later temples in Greece or classical Rome.

Surely the orientation was not the result of chance either. For example, the cathedral of Palma was located in such a way that every year a very curious phenomenon occurs. But it only happens twice a year and on two very specific dates: Every 2nd of February (2/2) and every 11th of November (11/11).

At dawn the sun’s rays pass through the main rose window, and are projected in a festival of colours just below the rose window on the opposite facade. So for a while we will have a double rosette, up one of glass and down one of light and color. This phenomenon is called “The Eight”, because you see two linked circles that look just like that, an eight.

It is said that the 8 represents perfection and infinity.

When King Jaume I decided to attack Mallorca he set out with his ships from the coast of Tarragona, but on his journey he encountered a very strong storm that almost wrecked them. He prayed to the Virgin and promised that if they were saved he would build a cathedral dedicated to her. Finally the expedition was successful and Madina Mayurqa (Palma) was conquered in 1229.

The construction of the cathedral began when King Jaime I ordered the consecration of the main mosque to the Virgin Mary, to be used for Christian worship. At the same time ordered the construction of a new temple, taking advantage of part of the space of the old mosque. The place was privileged, next to the walls and on the façade facing the sea. 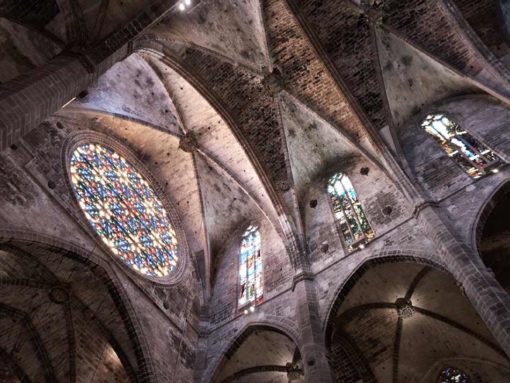 Interior of the Cathedral of Palma (photo by Andrei Kozlov)

The next king of Mallorca, Jaime II, began the works of the cathedral that we know today, although they took more than 300 years to be finished, in 1587.

The following centuries, the 17th and 18th, dressed and enriched the interior of the cathedral with paintings, sculptures and baroque style altarpieces.

1851 was a key date for the city and also for the cathedral. A strong earthquake brought down a large part of the main facade, which had to be almost completely remodeled.

After so many years, we can say that although “La Seu” (the name by which the cathedral is known) is fundamentally of Mediterranean Gothic style, it has elements of many other styles: Renaissance, Baroque and contemporary.

2 great artists and their contribution to the cathedral

The famous architect Antonio Gaudí spent more than 10 years doing works, with many contributions of his peculiar modernist style: the baldachin in addition to many interior ornaments.

And our Mallorcan painter, the internationally renowned Miquel Barceló, decorated the Chapel of the Holy Sacrament with a spectacular clay mural sculpture. It is dedicated to the fruits of the sea and the fruits of the earth. This work was very controversial because it has had strong defenders but also many detractors. 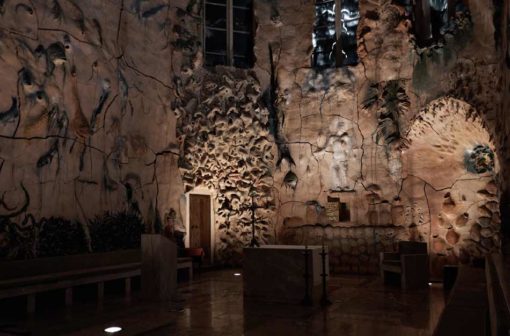 La Seu is the most emblematic monument of our city and for that reason it has been a place of very important events. There are currently two kings of the Regne de Mallorca who are buried in the Cathedral: Jaime II, king between 1276 / 1311 and Jaime III, our last king between 1324 / 1349.

tomb of Jaime II of Mallorca

Did you know that the rose window in Palma Cathedral is the largest of all the Gothic cathedrals in Europe? (more than 13 meters of diameter)

and that its vault is one of the highest, higher than that of Cologne Cathedral (Germany) for example? (Palma 44 meters / Cologne 43 meters).

Its overall dimensions are spectacular, 121 metres long and 55 metres wide, but its views of the sea make it practically unique in the world.

The legend of the walled-in lady

It was the 16th century and Spain was a deeply religious nation, very Catholic, which impregnated the whole of society and also Mallorca. It was in this environment that a girl named Elisabet Safortesa Gual grew up in a noble Mallorcan family. Her vocation was to be a religious but surely family interests drove her to marry a local nobleman.

A few years later, Elizabeth was widowed. Her perspective and opinion of civil society had not improved much either, since her religious vocation had been greatly strengthened. She asked the Church to be able to shut herself up in the cathedral, living a contemplative life.

A very small room was set up in which the door was covered and a lathe was placed through which food was passed. A small window overlooking a chapel was where Elizabeth spent hours praying… and so on, day after day, until she died in 1589, after 13 years of confinement. That’s why she was called the walled-in lady, this being real events and not just a legend. 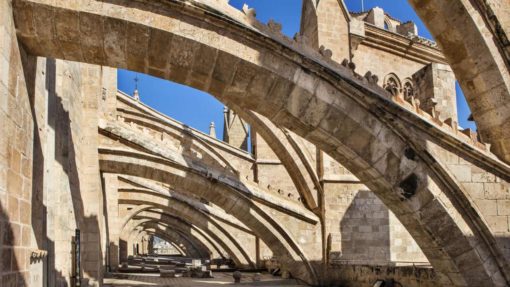 terrace of the Cathedral of Palma

Currently La Seu is visited by thousands of people every year, either to attend a mass, to see the interior or to enter the museum. But if you want us to recommend something special, here are two good ideas: Sign up for one of the visits that allow access to the upper terraces of La Seu, with truly spectacular views over the bay. And if you prefer something more cultural, attend one of the concerts of the “International Organ Festival” held every year.

Enjoy imagining all the events that have taken place in this cathedral, it’s up to you!

If you have liked it, maybe you are interested in knowing something about the building of the Lonja de Palma, follow the link: La Lonja de Palma