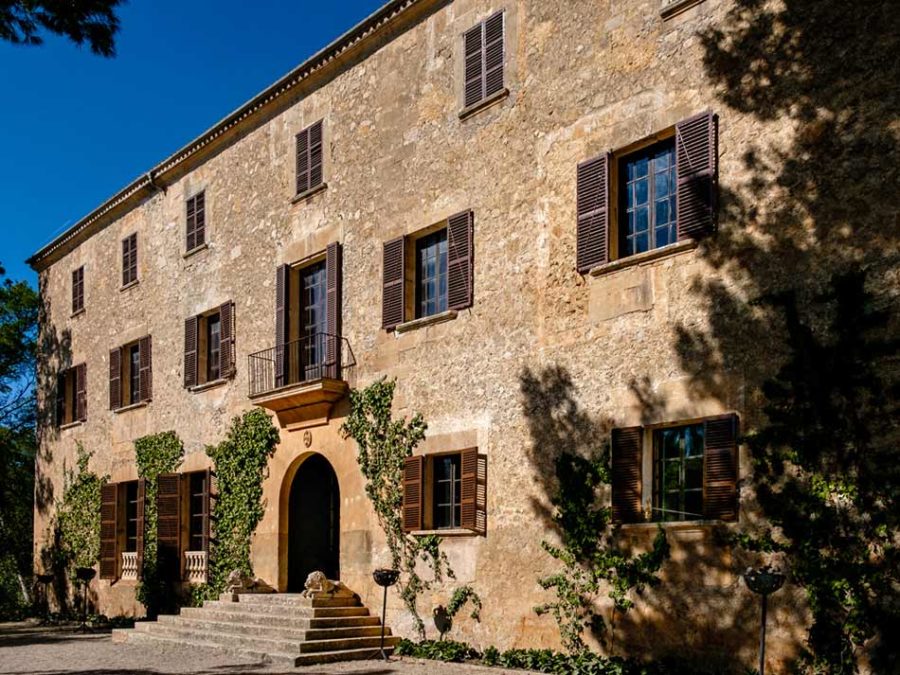 Posted on 18 July, 2020 / by Productes de Mallorca / in Heritage, Uncategorized

Today life offers us many comforts that make everything easier: Without leaving your living room, you access the Internet and can buy the bag or shoes you like, no matter if they are in Italy or Japan. You feel like eating some tropical fruits… no problem, at any store near your home you will get a pineapple from Costa Rica or some kiwis from New Zealand. But until not so long ago the world was a different place. And Mallorca, being an island, was even more different because practically everything that was consumed here had to be produced here. And in this system, the Mallorcan Possessió was a fundamental element.

What is a finca or the Mallorcan Possessió

Simplifying it a lot we would say that it is a manor house surrounded by productive lands for its agricultural management. But in reality it was much more than that, they were authentic production units, rural nuclei that represented the axis of economic organization on the island. In the houses lived the owners of the farm, but also the owner of the farm (l’Amo) and the workers, although logically not in the same rooms. There they lived, worked and had disputes, relationships and loves that led to marriage. It was somehow a small microcosm, with its own rules and dynamics.

When did they come up

Until King Jaime I conquered the island in 1229, Mallorca was under Arab rule. The organisation of the Mallorcan territory and the use of the countryside was based mainly on the farmhouses. But all this changed with the Christian rule of the Crown of Aragon, not only many types of crops, but also the farms themselves and their buildings.

From that moment on, in the 13th century, the estates as we know them today began to appear, although it was not until the 16th century that they began to be called Possessió. Many of them were actually based on the old farmhouses, and some have even kept their original, clearly Arabic name, such as those of Alfabia or Biniatzar.

How the Possessions are

The Possessions served both as accommodation and housing for the owners and workers, as well as other functions typical of agricultural activity, with facilities for processing and storing everything that was obtained from the land. In addition to warehouses, pantries and woodsheds, in some of them the tafonas (oil mill to make oil) or the cellers (wine cellar to make wine) are very striking. It should not be forgotten that the greatness of a Possessió also strengthened the image and power of his master in the eyes of the people.

Even though they are stately and sometimes imposing constructions, they have a certain austere appearance on the outside and do not usually appear overloaded. As they were built during different periods, the architectural styles can also be very different, ranging from Gothic, Renaissance or Baroque to Neoclassical.

They typically have a large interior courtyard (clastra) and the more elegant ones also have beautiful gardens. Some have their own chapel or church and if they were in key locations, they even had defense towers or fortifications.

The peculiar names of the Possessions

Here in Mallorca it is quite common to hear names in the style of Son Mas, Son Ramón or Son Gibert, and generally the “Son” indicates that it is a Possessió. Usually this Mallorcan “Son” accompanies names or surnames, but it can also accompany “malnoms” (nicknames), sometimes very funny, like Son Barbut, Son Panxeta or Son Marrano.

On other occasions the name of the Possessions is simply associated with a place or a physical feature, such as Sa Torre or Es Fangar.

But for me personally, those who are most suggestive are those who have resisted the passage of time and are true living history, keeping those names as Arab as Albocàsser, Binificat or Binifarda …

What I’m sure many Mallorcans have never fallen into thinking is that what today are hospitals (Son Espases, Son Dureta), industrial zones (Son Castelló, Son Oms) or airports (Son Bonet, Son San Juan) owe their names to the Possessions that were once on the same land.

The Mallorcan Possessió, where they were, how many there were

There are Possessions all over Mallorca, but it seems that the places chosen to locate these manor houses took into account several factors: It was important that there was a water source nearby, but it was always necessary to avoid it being a swampy place or easily flooded. The ideal was a promontory on rocks, a beautiful place from which to have a good view of one’s own land.

To say how many there were would depend very much on what time we place the question. But surely the best reference is the map of Mallorca drawn up by Cardinal Despuig in 1785. In this work of art, in addition to many other topographical details, more than 1250 Possessions are referenced.

What was produced and raised on the farms

The Possessions had a clear agricultural focus, but the main activity depended a lot on the area where the farm was located.

So for example in the mountain area the most typical was the olive grove and the production of oil, either for food, for making soap or for use in lighting lamps. In other areas, especially in the Pla de Mallorca, the main crop was cereals (wheat, barley, oats) and legumes. And we must not forget the vineyard, which was the fundamental crop in certain parts of the island such as Felanitx, Manacor or Binissalem.

Apart from this typical Mediterranean trilogy (wheat, vine, olive tree), the estates also had other trees, such as almond, fig, carob and other fruit trees. Among these, citrus fruits (oranges or lemons) usually predominate, although sometimes there were also plums, peaches or plums.

There was also a vegetable garden, but it was usually more for the farm’s own consumption than as an important economic activity.

By far the most important were the sheep and to a lesser extent the goats. Pigs were also essential and in fact one of the most typical positions on the farms was that of porquer, the person in charge of the pigs. Cows and oxen were held for their meat, milk and as an animal with great draught power. There were also horses, donkeys and mules, all of which were used to pull carts or move a waterwheel or other similar jobs.

Chickens, geese, ducks, turkeys and doves could complete this kind of small Noah’s ark that was the Possessions. All of them were always guarded by a good ca de bestiar, the popular Mallorcan guard dog.

Some disappeared due to urban speculation and the great growth on the island. Others have been falling apart and are languishing due to lack of investment in reforms and maintenance.

But many others have had a better fate and are preserved for the private use of their owners, whether Spanish or foreign. There are also those focused on ethnographic house-museums that can be visited, such as Els Calderers in the village of Sant Joan.

But the ones that we can really enjoy are all those dedicated to rural hotel or agrotourism, either preserving its classic flavor or reformed with an exquisite taste and with all the comforts.

If you come to Mallorca to rest a bit, one of our best recommendations is that you visit one of these Possessions mallorquinas. Or even better, that you stay a few days in the one you like best. You will discover our island in a very different way.

Photos: Our thanks to Fernando Sancho, with his blog www.perdidoenmallorca.com

One of the most visited towns in Mallorca by our visitors is the town of Valldemossa, in the heart of the Serra de Tramuntana. You can go to the article by following the link: Valldemossa