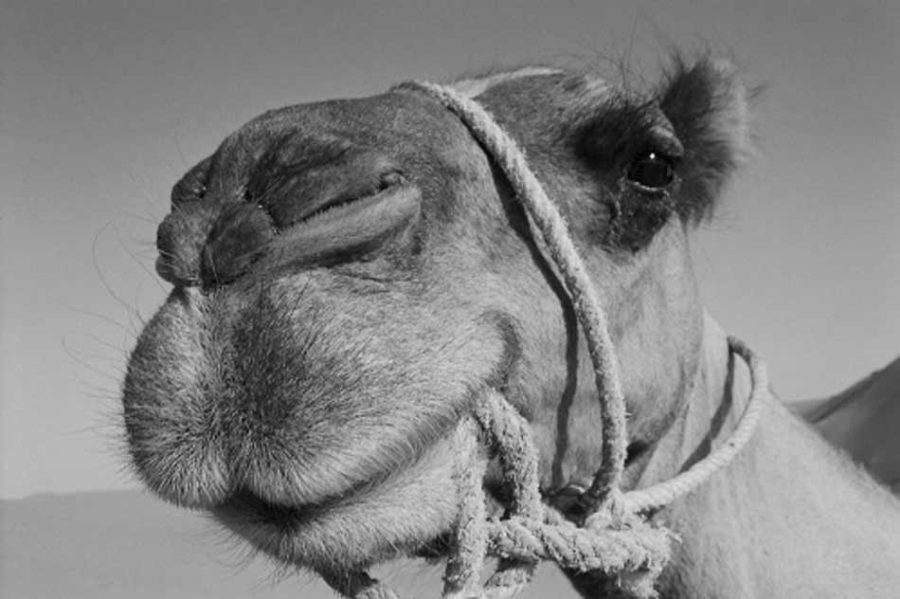 It is said that the 1960s were the best decade of the 20th century. Europe was gradually recovering from the disasters of war, the economy was improving and society was consolidating. And at the same time the way of thinking was becoming freer and more open: The Beatles, May 68 in Paris, the hippies, the protests against the Vietnam War. The world was changing and young people wanted to do things differently. Like the adventure of riding around Mallorca by camel.

The winter in Mallorca

Tourists came in summer looking for the sun, the beach and the relaxed life of southern Europe. In fact, in 1964 just over 907,000 tourists arrived in the Balearics, the vast majority of them in Mallorca. But the winters were sadder and more boring, with little activity in a small provincial capital.

And in that context, in the boredom of the winter of 1964, our two protagonists, Miquel Vidal and Gustavo Peñalver, met. Two young people of only 21 and 24 years respectively, the two artists, one a writer and the other a painter, each with his illusions and future perspectives.

The idea of riding around Mallorca by camel

A small bar on San Miguel Street in Palma was where Miquel and Gustavo had met and where they chatted while eating regularly. The youth is squeezing, the ideas are boiling in their heads. We need to make ourselves known, we need to do something, something that will make us famous.

¿Qué tal si damos la vuelta a Mallorca? And so we tell the story of the trip, one of us makes the texts and the other one makes some drawings that illustrate the adventure.

That’s fine, but it’s not something new. We should do something different, something that draws attention. And finally the idea comes up… We’ll go riding around Mallorca by camel!

That was the name of the camel, which had come all the way from Africa and was taking tourists for a ride on the beach at El Arenal. Miquel and Gustavo knew its owner, Mateu Campet, from Sant Jordi and were sure he would lend it out for a few days. Mateu agreed to the young people’s request and gave them a short course on how to handle Mohammed, because in addition to weighing more than 600 kilos, camels sometimes have a difficult temper. And Mohammed was not a young fellow either, but a veteran camel, probably with more than 40 years behind him.

On January 16th 1964 our three protagonists left the Plaza Cort in Palma. The place was crowded and the atmosphere was festive, very few had ever seen a camel in their lives and people came up to it, looked at it and caressed it. All the children were fascinated. The mayor came to greet them and finally the itinerary began in San Miguel street and then continued in Manacor street.

Slowly and step by step in the direction of Algaida, the expedition progressed. They took turns and sometimes one was on the camel while the other was on foot, enjoying the ride. Miquel, the writer, was making chronicles that the Diario de Mallorca was publishing every 2/3 days. For that reason many people already knew about this adventure and in each town they were received with great expectation. The mayor would come out to meet them, invite them to lunch or dinner, sometimes to sleep, and not just the two of them, but most of the time there was also a good stable and food for the camel. The public was amazed to see such an animal and some thought it was some strange kind of “Somera” (donkey, in Mallorcan).

Palma, Algaida, Llucmajor, Campos, Santanyí, Felanitx, Porreras, San Juan, Petra, Manacor, Artá… town after town, the shoes were wearing out and the tour continued as planned… with fun moments. The circus, the circus arrives!… the children ran around the square non stop.

That’s what some of the people believed when they saw Miquel, Gustavo and Mohammed appear. Seeing a camel was not a normal thing in Spain in the ’60s and so on… It had to be the circus, for sure! But no, it wasn’t the circus but the adventure of two young people eager to do something different.

The anecdote at Consell

In the village of Miquel, his friends also wanted to do something special and give the expedition a great welcome. And so they do. The streets are full of people, the moment deserves it.

The camel must also be honoured. And Miquel’s friends take it to a bar in the village and invite it to something very typical: a good Mallorcan aperitif, a glass of Palo. But as the camel is very big and drinks a lot, we better put it in a bucket, with several litres. Palo is a very rich, dense, sweet-tasting drink with a lot of alcohol. Mixed with water and ice, the Mallorcans love it, but surely for the camels it is not so suitable…

Mohammed drinks the whole bucket without a problem. After so many litres, his belly swells up and when it’s time to take him out of the bar, he can’t fit through the door any more. Well, we’ll let him rest until tomorrow. The next day the camel is still lying on the ground, huffing and puffing after the party. Poor Mohammed has pissed, shit and vomited and left the bar a mess.

The route is restarted.

After three days, it seems that the camel is better and they start again, towards the Tramuntana mountains. At one point, it starts to snow, it is cold, the slopes are hard and the effects of the Palo are still felt. Mohammed keeps walking but seems a bit tired and sad. Finally they arrive at Deyá, where they meet the famous English writer Robert Graves, who lives there and who already knew about their adventures.

Something unexpected happens… Mohammed stops, doesn’t want to continue and in a few moments falls sideways to the ground. The cold, the alcohol and the effort have overcome him and suddenly he has fallen dead. A sad ending.

Miquel and Gustavo decide to complete the ride around Mallorca on a Vespa and Miquel publishes a book with this adventure. It has been several weeks and more than 400 kilometres of all kinds of situations, but finally our protagonists achieved their goal: to make themselves known and to have successful professional careers.

To know more: Toni Bestard’s short film “Una vuelta a Mallorca en Camello” (A trip around Mallorca on a camel)

camel in MallorcaMallorcariding around Mallorca