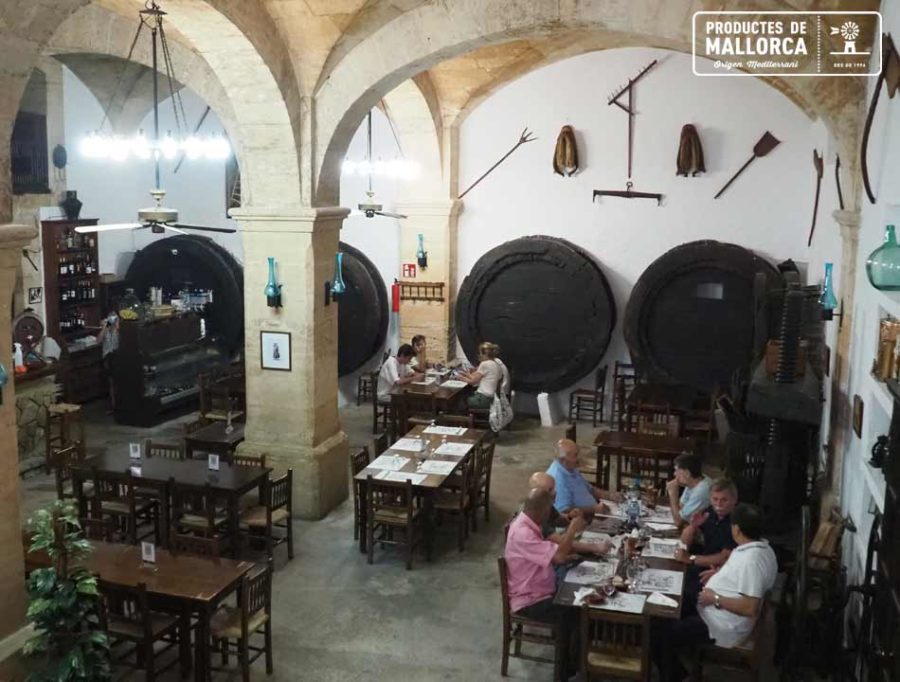 It has always been said that throughout the Mediterranean basin people eat very well because we have everything, good fish, good meat, good fruit and vegetables. But above all, because we have a century-old tradition of combining all these quality ingredients very well. And here in Mallorca the best place to taste the typical Mallorcan cuisine is, without a doubt, the Mallorcan celler.

Celler, origin of the word

The origin of the word celler is quite clear, as it comes from the Latin cellarium, which means storehouse or pantry. Surely one of the things that was stored in the cellarium was wine, and that is why in some languages the word has become related to wine. In English, cellar is that, a warehouse or wine cellar. And in Majorca a celler can be two things: a wine cellar, or a typical restaurant of the island.

It seems that it was the Romans who introduced the cultivation of vines in Mallorca, and logically, the production of wine. We go back more than 2000 years, as it was the Roman politician and military, Quintus Caecilius Metellus, who in 123 B.C. began the conquest of the Balearic Islands.

Much later, after the Islamic era, the vineyard and the wine were again in full swing and the first wine cellars were documented as early as the 14th century. They belonged to the king and the Church, and there are references to them in Palma, Inca and Alcudia. In the following centuries, XV and XVI, Felanitx is also mentioned as an important town in the production of wine. It is from the 17th century onwards that the cultivation of vines spread significantly on the island. From there to the present day there have been ups and downs, and there are currently more than 80 registered cellars or wineries.

Living in Mallorca it is common to receive visits from friends and acquaintances on the island. And the question always arises, where do I take them? How do I entertain them?

Apart from the typical tourist visits, one of my favourite resources is to go to a typical Mallorcan celler. It is usually very popular, both for the atmosphere and the traditional food, which is no longer so easily found in many restaurants on the island.

The celler mallorquin is usually located in the lower part of a building, and is accessed by going down some small stairs. This guarantees that when it is hot, the temperature is always cooler than at street level. The setting is traditional and somewhat rustic. The dining room is surrounded by circular wine boots, these are the botas congrenyades (barrels) made from holm oak and wild olive wood. They are large, very large, with a capacity between 1500 and 4000 litres, and are placed on top of stone blocks so that they cannot move.

This is where the wine was stored and dispatched, for sale to anyone who came to buy it with their own carafes. Taking advantage of the influx of customers, some meals were also offered. Little by little the food business went up and the sale of bulk wine went down, so the cellars were finally reconverted into restaurants.

What can you eat in a celler?

And where are those cellers?

In Palma, or in some inland villages such as Inca, Petra or Sineu. Among the best known on the island are the Celler Sa Premsa in Palma or the Celler Can Ripoll in Inca.

The snails and a very traditional dish in Mallorca, andt you shouldn’t loose the opportunity to taste. Our previous post talks about it. Visit our post about the snails with “all i oli”: Caracoles con «all i oli»

Caracoles con «all i oli»