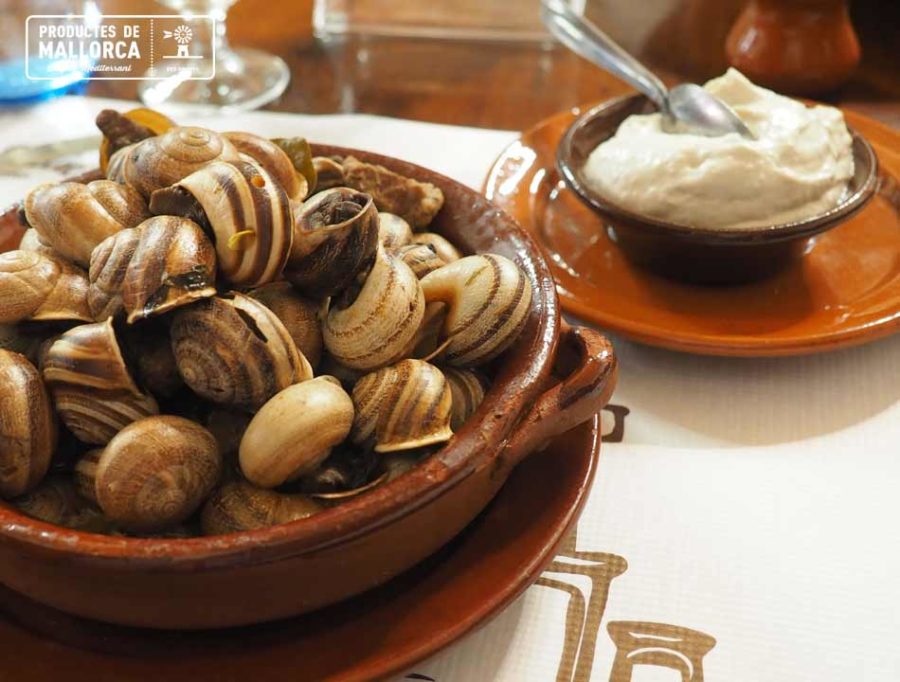 Posted on 3 August, 2020 / by Productes de Mallorca / in Gastronomy

Those who have not heard of snails with “all i oli“… although they may have read it in many ways, such as: aioli, ali oli, allioli. The name has been castellanized, but I tell you that the origin of the name comes from the Catalan, or from the Mallorcan “ai i oli”.

All i oli means “garlic and oil”, which are the original ingredients of all i oli sauce.

Today you can find supposed aioli sauces that include potato, mayonnaise, egg, milk… and all looking to make a softer, more delicate and… insipid version. What has come to be used to recreate this exquisite sauce, without which the snails are orphaned!

It is true that in other areas of Spain it is known by other names such as ajolio, ajiaceite or ajoaceite… but in Mallorca it is called that way, “ai i oli”.

To prepare the sauce of all i oli the peeled garlic was crushed with salt in a mortar and the olive oil was added. Little by little, the paste was handled with a wrapping movement, avoiding it to be cut, until a homogeneous yellow paste was obtained. Finally provided a delicious aroma of olive oil and a strong garlic flavour. Nowadays this sauce prepared according to the traditional recipe can only be found in private homes where the cooker is somewhat sybaritic. What is usual in most restaurants is a substitute, something like a mayonnaise with garlic.

Snails with “all i oli” from my childhood

I remember that in my childhood and youth, my aunt, who was a fantastic cook, used to make us spectacular snails with “all i oli“. And that had a lot of merit, because it was not only the “know-how” provided by years of dedication to the culinary art, but also the hard work involved.

The snails, we went to look for them in the dry wall walls, so typical of the Mallorcan countryside, and in the dunes of the land near the beach, after a heavy rain. It was the festive and cheerful part, in which all members of the family were welcome. We used a camping gas and flashlights if it was already night.

The cleaning of the snails took three days and three nights. Used a net or in a pot with plenty of flour, for them to purge. By ingesting the flour, the snails ended up taking out everything they had in their guts. Athe end you could eat them with complete peace of mind. The fun for the naughty ones in the house was to sneak into the kitchen at night and uncover the pot in which they were purging. On the next morning the walls, the ceiling and in almost every corner there were snails… the screams of the cook woke us all up!

The herbs for the preparation of the broth, which was key to the taste of the snails, were secret and the sole responsibility of the cook.

The best of all was the moment to sit down at the table, each one with a toothpick between their fingers, in front of the plate of all i oli, and the snail dish. Sipping the sauce from inside the shell was sublime.

The dry walls where we looked for snails are one of the attractions of the Mallorcan countryside, visible especially in the Tramuntana. Follow the link to know more about this characteristic landscape and those who built it: Dry wall in Mallorca