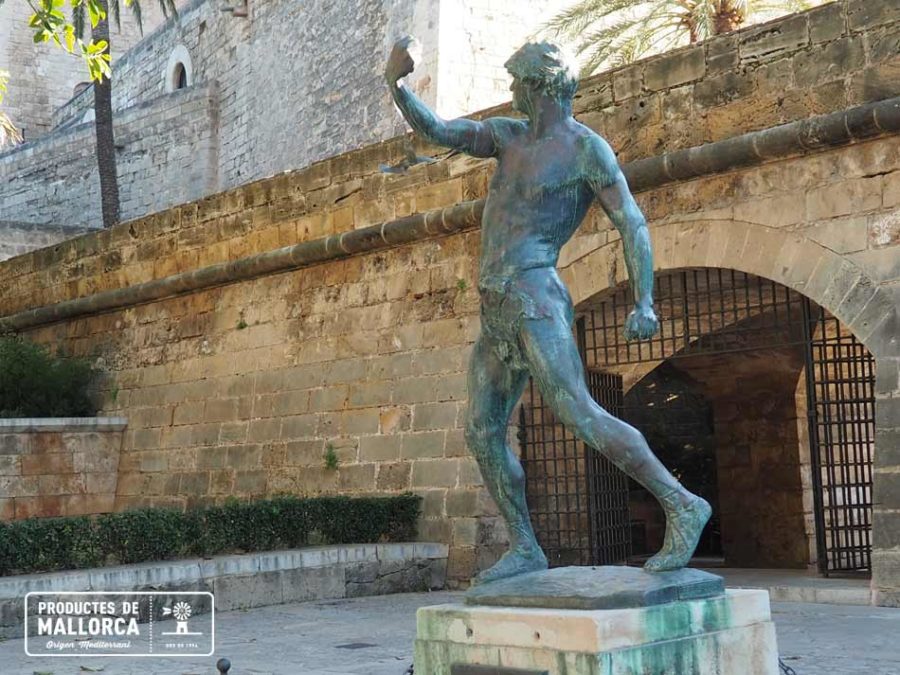 When I was a teenager and lived in Palma, I really liked going to Honderos Street. It wasn’t such a nice street, but it was the area of town where most of the motorcycle shops were. Looking at the storefronts and dreaming of being able to have one day was for free. I never got into the real sense of why that street was called that, because the important thing was the bikes, nothing else. But years went by and I discovered the reason why a street was dedicated to slingers, to the Balearic slinger. I will now tell you its interesting story.

Who were those slingers

For they were elite warriors for hire, that is, mercenaries, and originally from Mallorca and Menorca. They were shock troops, as they fought on the front line harassing the enemy to start the fight. With the help of a slingshot they threw stones at great speed and broke up the ranks of their opponents by breaking their shields, helmets or weapons.

Boy, either you hit it or you don’t eat

Legend has it that parents, in order for their children to sharpen their aim with the slingshot, subjected them to a very stimulating test: at a distance and on top of a stick, or a tree branch, they put the boy’s ration of food (probably bread). The boy had to slingshot until he hit it and the food fell to the ground. As many times as it took to get it. Only then could he eat…

How the Balearic slinger fought

They were in the front line and wore little clothing, dressed in a few skins or light fabrics. As a defense, they wore a shield lined with goatskin. The important thing was the sling, and they usually carried three, of different sizes depending on the distance they wanted to shoot. One was carried in his hand, one in his waist, and the third in his head.

The sling was made of braided vegetable fibers and the projectiles they threw were made of stone or lead and up to 500 grams. The speed that could be reached was up to 250 kms/hour, so a direct impact was very, very strong. After the rain of stones, the infantry intervened to continue the battle.

First period and fight alongside the Carthaginians

We have to situate ourselves in the Talayotic culture, that is to say around 1500 B.C. and in both Majorca and Minorca. The slingshot was supposed to be used for hunting and fighting by then, but the slingshot became famous only later.

It was from the 5th century B.C. onwards that the Carthaginians realised the great strength and accuracy of Balearic slingers. They were recruited in their wars against the Greeks in Sicily (410 BC) and also participated in the first Punic war against the Romans (264 BC). However, it was during the Second Punic War that they gained real prominence and fame. The Carthaginian general Hannibal, crossed (218 BC) the Alps with his troops and 37 elephants towards Rome. Hannibal, supported by up to 2000 Balearic slingers, defeated the Roman legions in the Italian peninsula in several battles and relentlessly.

Years later they also took part in the 3rd Punic War (149 BC), but hardly any testimonies have been preserved from this period.

Against Rome and with Rome

Once Carthage was definitively defeated, the Roman general Caecilius Metellus wanted to invade Mallorca (123 B.C.). The Balearic slingers received them “by stoning”, although the Romans finally achieved their purpose.

Being mercenaries and as valid as they were, our slingers ended up fighting for Rome. They were called funditores and participated among Julius Caesar’s troops in the Gallic War (56 B.C.) and were highly valued.

After this period of war, the sling continued to be used in Mallorca and Menorca, but for shepherds or as a simple pastime.

They were very appreciated in ancient times and today they are heroes or myths in the Balearic Islands, for something the word Baleares, coming from the Semitic language, means “Land of the masters of the slingshot”.

Nowadays it is a sport practice, with a Balearic Federation that organizes several meetings and competitions.

An object that we consider to be typically Mallorcan, and which must have coexisted with the Balearic slingers, is the siurell. The post you can find clicking on the link talks about the siurell: Siurell