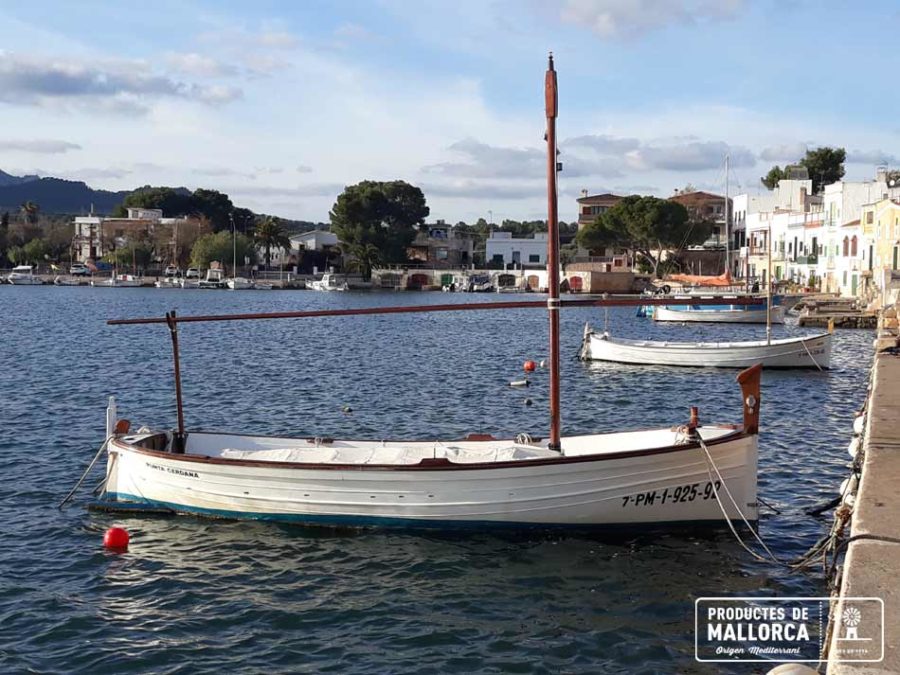 Posted on 6 May, 2020 / by Productes de Mallorca / in Traditions and customs

One of my favourite places in Mallorca is Porto Colom, and above all, because of its still very Mallorcan atmosphere and the tranquillity that you can breathe. And the truth is, what I like best by far is the port, with all those little white and wooden boats so typical of the island. They’re our popular Llaut.

Although the tradition of sailing and boating in the Mediterranean is thousands of years old, the first evidence of the Llaut dates back to the late Middle Ages. At that time it was called Lahut and was an auxiliary boat for bigger ones, for fishing and for coastal navigation.

What most traditionally defines the Llaut would be its laurel leaf shape (seen from above), a front or center mast and its latin sail (2 or 3). The long, vertical outer rudder is also very characteristic. There are several sizes, typically between 4 and 6 meters, and with different construction details:

In his work Die Balearen (1869) Archduke Louis Salvador of Austria told us that “On the northern coast of Mallorca, llauts usually have a triple keel while those in the Bay of Palma generally have only a single keel”.

The reason for this is that the Costa Nord is steep and the sea rougher, so the llauts are often pulled out of the water. The triple keel makes this manoeuvre much easier. On the contrary, in the bay of Palma, the most usual thing is to leave them in the sea, tied up.

In the past, the llauts were built in wood by specialists called mestres d’aixa, who made them by hand. Today, fiberglass, plastic and standardized molds have gradually replaced this type of traditional shipbuilding.

As mentioned in Die Balearen, in the 19th century there were several types of Llaut, with differences in their size and uses.

This type was used for trade and domestic traffic, between the ports of the Balearic Islands, the Peninsula and North Africa. Very important was its use between the end of the 18th century and the beginning of the 20th century for trade between the port of Sóller and the South of France. Oranges, lemons, oil, wine and nuts were exported there.

These llauts were large, up to 20 metres, with space for cargo and even 7 or 8 cabins below deck. The stern was not pointed, as the smaller ones typically have, but flat or rounded.

It is said that one of these Llaut was capable of sailing between Barcelona and the Port of Soller in about 9 hours, despite having only Latin sails and no auxiliary engines.

And these llauts travellers, big and very sailors, launched in different occasions to cross the Atlantic, to Cuba, Puerto Rico, Haiti or even to Argentina.

This one is smaller than the traveller, but it could still measure up to 10 or 12 metres. It was used for domestic shipping in the Balearic Islands, and sporadically for a trip to the Peninsula.

Smaller than the previous ones, between 4 and up to 10 meters, it was traditionally used for fishing, and later for the recreational navigation of its owners. For this more private and leisure use it has been the type that has survived the most over time and of which there are still quite a few units left. Originally they didn’t have an engine, but little by little they have been installing small Diesel engines or lately, even some electric ones.

Today there is a great fondness for things that symbolize the local, the traditional. And that is why we currently have different exhibitions and regattas of traditional llauts, of Latin sailing.

Even so, the number of wooden llauts has been decreasing in recent years, due to the greater difficulty in maintaining and repairing them. According to data from 2010, there were 653 units of traditional llauts left in Mallorca at that time.

Apart from these, there are, and continue to be, those made of fibreglass and plastic, sometimes using the templates of former mestres d’aixa to make the moulds. There are also larger ones, including cabins, motorized and with all kinds of equipment. The latter are the llauts known as “Lord’s” for their comforts.

Anyway, if you like the sea and want to enjoy our coastline, sailing on a llaut is one of the most authentic experiences. Especially if it’s a traditional one made of wood.

The llauts were made by authentic craftsmen of whom very few remain. The following link tells something about this old trade in Mallorca, which also existed in the other Balearic Islands: Mestres d’aixa – ship’s carpenters