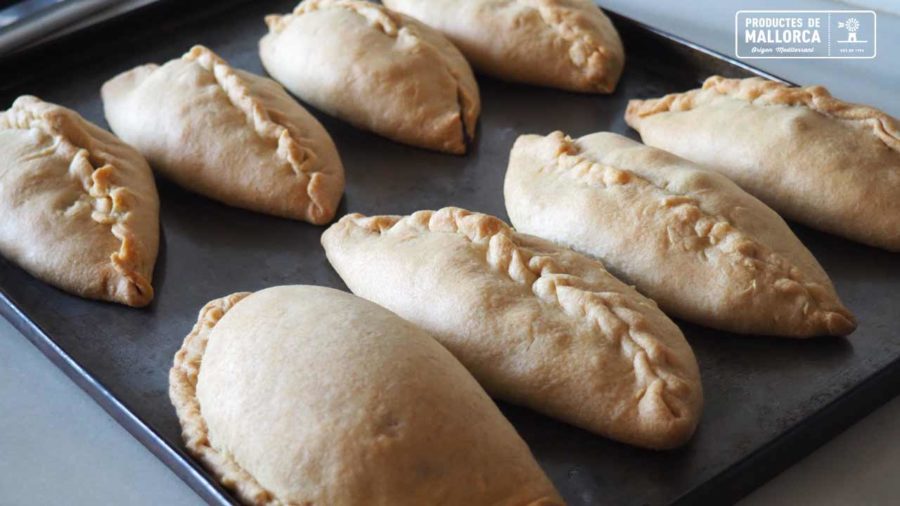 Ever since I started describing Mallorcan recipes this post has been on the to-do list and every now and then someone has been reminding me that I had to do it. … is that they are so good! So finally here is the post… how to make cocarrois with a simple recipe. Also with an explanatory video shown at the end, which shows a trick for the most difficult step, which is the closing of the cocarroi.

There are so many similarities between the cuisine of Mediterranean populations, that I don’t think I am wrong in saying that the Mallorcan coca, the Italian pizza and the Turkish lahmacun have a common origin.

While the coca mallorquina is a stretched dough covered with vegetables and baked. There are many variations, and the vegetables are available at the time of year. The cocarroi is the same closed coca as if it were a calzone pizza. Although over time, the composition of the dough and the contents may have distanced the cocarroi from the coca.

How to make cocarrois – recipe

Flour, pastry flour, (the one you take, which will be almost 1Kg)

Clean and cut the spinach and discard the stalks.

Cut the spring onions into thin slices (including the green leaves).

Cut the cauliflower into small pieces.

Mix well all the above and season with salt, sweet paprika and oil.

Let it rest while you prepare the dough.

Mix the pork lard with the olive oil and beat well.

Then add flour (passed through a sieve) and beat, and add the water, until you get a homogeneous dough, which does not stick and is easy to handle.

Make a ball with it and let it rest in a covered container with a clean cloth for 30 minutes.

Divide the dough into 10 or 12 portions. With each portion you will have to do the same shaping and filling process to make each cocarroi.

With the help of a roller you stretch out one of the portions giving it the shape of a disc with a diameter of about 20 cm.

Place 2 tablespoons of stuffing (previously prepared vegetables) in the center of the disc. Avoid using the juice of the vegetables, because it would melt the dough.

Add 3 ór 4 raisins and several pine nuts to each cocarroi.

Bend the disc over itself, leaving the filling inside. Squeeze the open side of the dough with your fingers until you reach the vegetables, so that no air or dough is left behind. Cut off the excess dough so that it is shaped like a crescent.

Seal the crescent by making a continuous fold like a cord, so that the filling does not come out.

Place the cocarroi on a previously oiled baking tin, or on a baking tin covered with baking paper.

When you have all the cocarrois on the can in the oven, we start cooking.

Bake at 170°C during 45 minutes, or till the cocarrois begin changing color.

We have edited a very useful explanatory video as it is much more graphic. You may watch it below:

Another interesting Mallorcan recipe that I enjoy very much is the frito de cordero, known locally as frit de mè, the link below takes you to a post where I reveal how to make it: Making frito de cordero