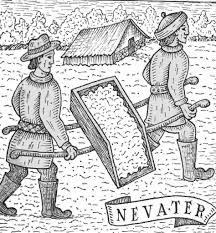 My grandmother used to say when the heat came, summer calls for… ice cream. Put yourselves in situation… July in Mallorca, 36 ºC degrees of heat, difficult to stay without air conditioning, or at least, with a good fan. Sweat soaks your forehead, thirst squeezes… you open the fridge, and there it is, a very fresh beer. There are also fruits, soft drinks, water… even some ice cream in the freezer. The norm in any home, in 2019. But what is considered normal today, 200 years ago was not… because there were no refrigerators or freezers, at least as we know them today.

However, in Mallorca there were ice creams and also ice for different uses… how was this possible? Thanks to the dedication of a few people, the “Nevaters“, today a trade already disappeared.

It seems that since the 14th century there was a custom in the mountains of the “Serra de Tramuntana” to take advantage of the natural cavities to build a “casa de neu” (house of snow).

When it snowed in the winter months, the workers climbed the mountain. There with shovels, buckets, baskets and everything at hand, as much snow was collected and stored in the “casa de neu”. The snow was stepped on intensely until it turned into ice and once the house was full, it was covered so that the cold would last for months.

In spring and summer they climbed the mountain again, collected the ice blocks and as quickly as possible, they were taken to Palma, sometimes even at night to avoid the heat.

This “white gold” was a real industry in the Tramuntana Mountains and up to 42 of these constructions have been counted for snow storage. This activity lasted until the 1920’s when an ice factory was set up in Inca to supply the whole island.

I don’t know what you think, if the summer calls for… ice cream or something else. I do believe that if today an ice cream is a delight, to be able to eat one 200 years ago must have been a real pleasure of Gods.