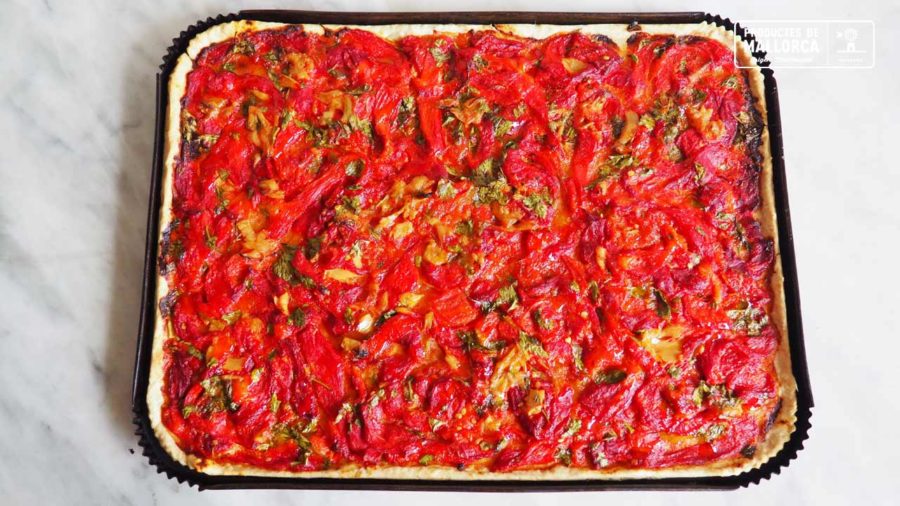 The Mallorcan coca with roasted red peppers is very tasty, but, it gives so much work that I used to wait for some relative to make it. However, since I was given this recipe, it has become one of my favorites. Now I really do it myself!

Roasting the peppers in the traditional way is very hard work, and consists of roasting them on a grill and turning them over until the skin is black (burnt skin). This was done by the cooks of the past, who were true heroes, and who because of a special aroma were capable of very hard work.

This is easier to do in the oven, and it’s still the hardest part of this recipe, so cheer up. The skin of the pepper (which is very thin) must be removed.

Recipe of Mallorcan coca with peppers

It is very important that all the ingredients are of the highest quality, because it is directly reflected in the final result.

This Mallorcan “coca”, as I make it at home and for the measurements I indicate in the recipe, will be a fine coca (in terms of mass) and measures approximately 40 x 30 cm (a medium size tin).

Roast the peppers, together with the tomatoes and the head of garlic in the oven at 170ºC for 45 minutes, turning the peppers (if necessary) so that they are cooked evenly throughout and their skin is loose.

Then let everything cool in a container covered by a clean cloth. This “everything” includes the liquid generated by the peppers and tomatoes.

As soon as they are cold, remove all the skin from the peppers with your fingers, or with the help of a sharp knife. Remove the stems and empty the seeds, leaving only the pulp of the peppers, which you must cut into long, thin strips.

The tomatoes are peeled and also the garlic, and are crushed or cut very thinly with a knife.

Put everything in a container, to which you will add a few sprigs of very finely chopped parsley.

Season with salt, black pepper, olive oil, and let it rest while you prepare the dough.

A measure of olive oil (a glass of approximately 180ml), the same measure of beer, and the flour that you take until you get a homogeneous dough, without lumps, that can be easily worked with your hands and does not stick.

Spread the dough on a baking tin previously smeared with olive oil so that it does not stick (or with baking paper). The dough should have a higher flange to keep the roasted peppers from falling.

The thickness of the dough should be thin (2 to 3mm) In the case that doing this on dough, in Mallorca we make a second coca, even if it is smaller, and it can be with other ingredients.

Sprinkle with a little sweet paprika to complete the flavour. This may be better done after baking the dough, but this time I’ve done it before.

Having preheated the oven to 170°C, bake the dough for 5 minutes (or until it starts to bulge or change colour) and take it out immediately.

Place the roasted peppers on top of the dough so that they are evenly distributed.

Bake for 45 to 50 minutes at 170°C. It is better to keep an eye on it, as each oven works differently, the coca may need a longer or shorter cooking time depending on the amount of peppers used. It should be baked until before the pepper or dough starts to burn or the dough begins to change color.

Once out of the oven, pour a splash of oil on the pepper coca.

The coca is ready to eat!!

Here is a video explaining the process, a little more visual:

If you dare with another Mallorcan coca, you will find it easier, and it is also exquisite: Mallorcan «coca de trampó»