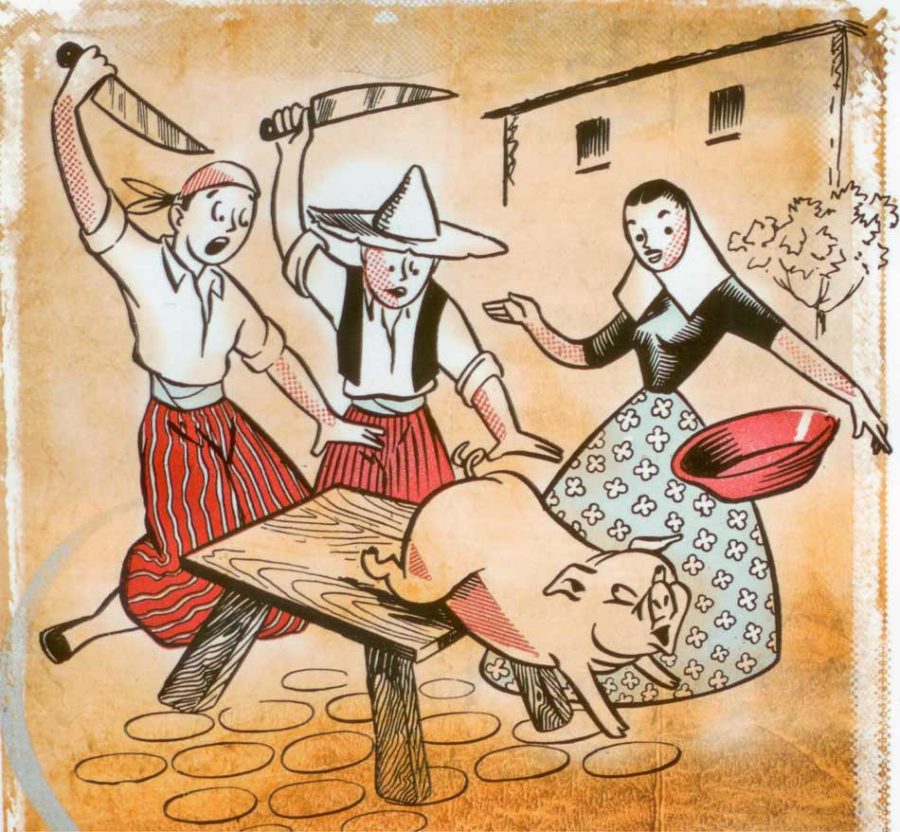 Posted on 22 September, 2019 / by Productes de Mallorca / in Traditions and customs

I remember that as a child, when winter arrived, we would go to my uncles’ house in Petra, to participate in the festa de matances which is the celebration of the pig slaughter in Mallorca. An important event and much awaited by everyone in the village. Traditionally it was not only a time of family reunion, but it represented the power to have meat and sausages to face the winter.

Start of the day of the pig slaughter in Mallorca

The event began very early, when it had not yet dawned. We woke up early in the morning because of the pig’s scream. At the same time and for hours, we heard the cocks of the area singing announcing the day.

The strongest men grab the animal on the slaughter table. Other times they hang it upside down on a hook. The matador looks for a quick death and at the same time extract all the blood of the animal. Nothing is wasted, and the blood will be kept in an earthenware container to elaborate later the “frit de matances”, called frito in Spanish Castillian, and the butifarrones, or botifarrons.

The pig skin is cleaned with great care, fire and pumice or something more forceful, and also with hot water. And then the body of the animal is cut in a systematic way and each part will be used for a specific purpose.

At mid-morning, to reward those who have worked and also the guests, the cook prepares the frit de matances. This rich dish, typical of this day, is prepared with lean meat, bacon, liver, lung, heart, chips, garlic, red peppers, chilli pepper, salt oil and bay leaf. He also prepares some meatballs, which I made more than once myself. A glass of Palo liqueur or Herb liqueur (Herbes de Mallorca), makes the rest of the workday more bearable and fun.

Children end up running to avoid having the pig’s tail hanging from the back of their clothes. It usually ends up on the back of the youngest member of the family. Meanwhile, childhood laughs with the jokes of the elders or helps in the work, which must be finished soon.

Cleaning of the casings

The animal’s casings are immersed in very hot water after being emptied and thoroughly cleaned.

After mincing the meat and bacon and adding the spices and salt, the strongest arms mix everything until a homogeneous dough is obtained. I remember how impressed I was to see the paprika-colored arms as they pulled their hands out of the dough.

The lady of the house fries some sobrassada in a frying pan, to taste the point of salt, paprika and spice before giving her approval.

They let the mixture rest and then fill the casing with it, and finally they hang the different sausages on some canes in the family dryer, which is an airy room in the house that is made to be used only for these purposes.

The butifarrones or botifarrons are made from a mixture of meat, blood and spices, and boiled for a while before hanging to dry; and are ready to eat the same day.

Thinner sobrasadas, called longanizas or llonganissas can be eaten after 15 days of curing. And they are usually eaten grilled with a piece of bread. The thicker the sobrassada, the longer it needs to cure. Rissada, the bufeta, the poltrú, the culana and the biggest one, the bisbe, that can reach 30 kg.

The camaiot they elaborate it filling some pieces of skin of the pig and hams with different meats of the pig. After boiling, careful not to break the darning thread, they can be eaten.

The excess of lard is kept in glass jars, to have lard all year round, and they also keep bacon and salty bones, which will be ingredients of various typical Mallorcan dishes.

The pig slaughter in Mallorca ends with a full pantry, and the satisfaction of the participants to maintain a tradition that identifies us as a community, apart, of course, from the personal enjoyment of the family meeting.

The origin of sobrasada